ROOT Sports has announced that it will air five Pirates Spring Training games this season. Here are the games that will be televised.

The Pirates will be carrying an additional game this Spring, as they would usually air four games. In addition to the Spring Games, ROOT will have Pirates pregame and postgame shows before and after each game.

MLB.com’s Jonathan Mayo has just released his 2013 preseason Top 100 prospects list. He has four Pirates prospects listed, along with a scouting report for each.

Gerrit Cole (#9): Pitchers who are No.1 overall picks are supposed to have frontline starter potential, and Cole definitely has that. The UCLA product is big and strong with the frame to be a power pitcher who tops a rotation. His fastball is plus plus, up to 98 mph with ease, with a ton of life. His slider is also a plus, a hard breaking ball that gets swings and misses. His curve and changeup, also thrown hard, aren’t quite as good as the fastball-slider combination, but both might be above-average pitches. The only time he gets in trouble is when he leaves pitches up in the zone a bit, but he has the weapons to escape trouble. Cole reached Triple-A in his first full season of pro ball and seeing him in Pittsburgh in 2013 seems completely reasonable to expect.

Jameson Taillon (#15): Pirates fans who are eagerly anticipating the arrival of the one-two punch of Gerrit Cole and Jameson Taillon shouldn’t have to wait too much longer. The big right-hander who came from the Texas high school ranks finished the season in Double-A, with three outstanding starts to finish the year. His fastball is a plus pitch and he’ll touch 96-97 mph with it. His secondary stuff is still developing, but both his breaking ball and offspeed offering have the chance to be above-average offerings. He gained more confidence in his curve as the year went on and he showed better feel for his changeup as well. He’s still growing into his body and tweaking his delivery, leading to some overall command issues, though that shouldn’t be a long-term concern. Another year of experience under his belt might be all he needs to be ready for Pittsburgh.

Alen Hanson (#54): Hanson had put up solid numbers in rookie ball, then surprised some when he made the full-season West Virginia Power out of Spring Training in 2012. All he did there was lead the circuit in total bases while finishing in the top 10 in a host of offensive categories. He makes consistent contact and can drive the ball to all fields and will use an inside-out swing a well. An outstanding bunter, he also has the strength to show occasional home run power. He has very good speed and is still learning how to use it to his benefit on the basepaths. Defensively, he has the range and the hands to stay at shortstop, but his arm has been erratic. He’ll stay at shortstop for now, and more people believe he can stay there than they did before his full-season debut, but some feel he’ll eventually move over to second base.

Gregory Polanco (#65): There were few prospects in all of the Minor Leagues who broke out more than Polanco did in 2012. The speedy center fielder topped the system in stolen bases and finished second in a host of other offensive categories. He has the chance to be a true five-tooler on the field. With a long, lean frame, he’s an aggressive swinger who started to learn the values of plate discipline, making him a much more dangerous hitter. He should hit for average and at least a little power. His plus speed will make him a long-term basestealing threat and an outstanding defensive outfielder.

My assessment: Cole staying in the Top 10 isn’t a shock at all based on his stuff and the year he had in his first pro season. Taillon missing the Top 10 doesn’t surprise me, when you consider that he didn’t have that strong of a 2012 season with Bradenton, but at least he made the Top 15. Hanson not making the Top 50 isn’t a real surprise, despite the outstanding 2012 season he had at the plate. What hurts his stock right now is his below average defense. Polanco’s spot on the list surprises me, when you consider he also had a breakout season like Hanson, but played very good defense at his position, unlike Hanson. So I thought his 2012 would at least make him Top 50 worthy. The one notable who didn’t make the Top 100 was Luis Heredia. I’m really not all that shocked that Heredia didn’t crack the list since he isn’t a dominant pitcher yet, and because he’s yet to pitch full season ball. Overall, I find the list to be pretty accurate for the most part.

According to a team press release, the Pirates have signed pitcher Kyle Waldrop to a minor league deal. The former first round pick of the Minnesota Twins back in 2004, profiles as a sinkerball pitcher. He made 17 appearances with the Twins last season, where he posted a 2.53 ERA and a 1.55 WHIP. Waldrop is likely to start the season in the Indianapolis bullpen.

John Sickels of minorleagueball.com has released his 2013 farm system rankings, and has the Pirates ranked at #5. Last year at this time, Sickels had the Pirates at #12. He mentions the impact pitching arms with Gerrit Cole, Jameson Taillon and Luis Heredia, as well as other good pitching depth behind them. The breakout seasons from Gregory Polanco and Alen Hanson shows how much they’ve improved with Latin American signings. However, Sickels does mention that they need more hitting depth. I think it does speak volumes about their pitching and their Latin American prospects, despite not having a ton of hitting talent.

Alex Dickerson was mentioned on Jonathan Mayo’s list of Top 10 first base prospects, ranking him #7. Dickerson spent the 2012 season with Bradenton, and posted a .295/.353/.451 line in 129 games for the Marauders, while being named the Florida State League Player of the Year. Defensively, he was below average as he committed 17 errors. He was moved to first base after he was drafted in 2011, so it may just be a work in progress. Despite having a good year at the plate, Dickerson hit just 13 home runs in 488 at bats. He’ll need to hit for more power if he wants to become a legitimate first baseman moving forward. 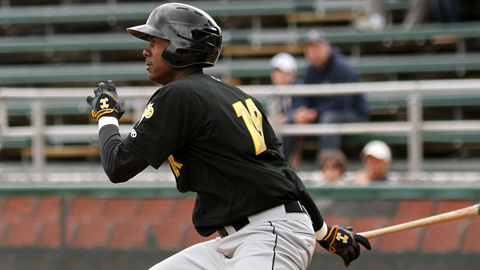 Josh Bell’s first season of professional ball last year didn’t go as well as planned, as he struggled to get it going, and suffered a severe knee injury, which pretty much wiped out his 2012 season. The Pirates second round selection in 2011, posted a batting line of .274/.288/.403 in just 15 games before the injury. Baseball America rated Bell the 60th best overall prospect going into last season. So what can the Pirates expect from him this season? I would expect him to adjust to the colder weather, which may have been why he struggled. Consider that he played his high school games in the state of Texas, so it could be a legitimate reason. Combined that with the fact that he was adapting to his first season of pro ball. With that said, he should be in more of a comfort zone this time around. We know Bell has the physical tools, but scouts have also raved about his maturity level for his age, which should help him make adjustments as he goes along. Based on the missed time last year, he almost seems like a forgotten prospect by some. Barring injury again, I think Bell will have a strong season, maybe not to the level of what Gregory Polanco did last year, but solid enough, which the Pirates would take from someone who lost a year of development.

Alen Hanson has cracked Jonathan Mayo’s Top 10 shortstop prospects list, and has him ranked #8. Hanson had a breakout year in 2012, posting a .309/.381/.528 line and stole 35 bases in 124 games for the West Virginia Power. The biggest issue for Hanson has been his defense, in which committed 40 errors, while posting a dreadful .907 fielding percentage. The scouting report on Hanson’s defense is that he does have good range, but lacks a strong arm and his accuracy is inconsistent. If Hanson can cut down significantly on the errors, he could easily be the best shortstop prospect in the minors.

MLB.com’s Jonathan Mayo is releasing his list of top Minor League catchers, and has Wyatt Mathisen ranked in the Top 15 at #14. Mathisen was selected by the Pirates in the second round of last year’s draft, as he was considered the top prep catcher despite not playing many games behind the plate in high school. After signing with the Pirates, Mathisen posted a batting line of .295/.388/.374 in 45 games for the GCL Pirates. Mayo points out that he’s very athletic and could move to another position down the line, which isn’t uncommon for prep catchers. Neil Walker would be the perfect example of being a top prep catcher and wound up being converted into an infielder.

According to Ken Rosenthal, the Pirates have finalized their two-year deal with Francisco Liriano. The two sides had agreed on a two-year contract back in late December, but an injury to Liriano’s non-throwing arm put the deal on hold. Rosenthal adds that if Liriano misses time with injury, that his salary for 2013 will be reduced. Liriano will join a Pirates rotation consisting of A.J. Burnett, Wandy Rodriguez, Jeff Karstens and James McDonald.