Since his call up to the Pirates in 2009, Garrett Jones has been a fixture in the Pirates lineup in some degree, whether as an everyday regular or a platoon. 2012 was a career year for Jones, as he posted a .274/.317/.516 batting line in 515 plate appearances. Going into the offseason, there was speculation about Joel Hanrahan and/or Garrett Jones being trade candidates. Hanrahan of course is now with the Red Sox, and the question now becomes if Jones will be next?

The Pirates now find themselves with plenty of depth after acquiring Gaby Sanchez and Travis Snider at the trade deadline, Clint Robinson earlier in the offseason, and Jerry Sands in the recent Hanrahan deal. Jones obviously has the highest trade value out of the other four, which makes the decision to trade him that difficult. Jones could be a vital part of the Pirates offense in 2013, but on the other hand, his stock will probably never be as high as it is right now. Personally, I would be all for trading Jones if it meant getting another starter to solidify the rotation even more. If not, then I would just hang onto Jones. 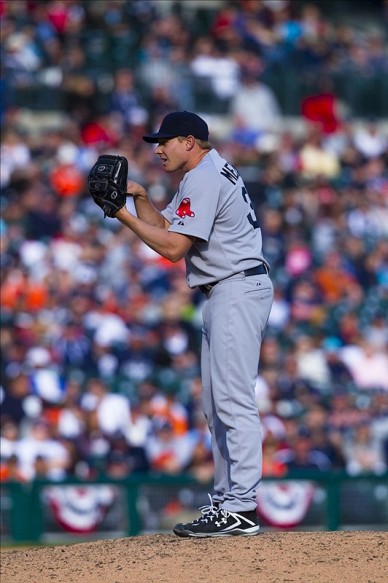 After a solid 2011 season as the Houston Astros closer, Mark Melancon was dealt to the Boston Red Sox as part of the Jed Lowrie deal last offseason. His ERA in 2012 took a huge hit, as his 6.20 ERA was twice as high than in 2011. Looking at the other numbers and metrics, they don’t seem all that bad. He put up a 1.27 WHIP, a K/BB ratio of 3.42, and a .257 opponents batting average, all pretty good. His FIP was 4.58, and he posted a 50% groundball rate, which would seem to indicate that his ERA may have been a fluke. Melancon’s fastball velocity also saw an increase from 92.5 in 2011 to 93.1 this past season. Undoubtedly, his 1.6 HR/9 was the main reason his ERA took a huge jump in 2012. It seems strange when you consider that Melancon is a groundball pitcher for the most part. So when you consider the other numbers, and the fact that he’s going back to the National League, Melancon could very well have himself a bounce back year in 2013.

Now that the Joel Hanrahan trade is officially done, here is my assessment of the deal.

The Pirates of course won’t have to worry now about Hanrahan in terms of avoiding arbitration with him. I like Brock Holt, but he projects more as a utility infielder, especially when you consider the Red Sox have Dustin Pedroia at second base and plenty of other infield options. On paper, it does seem like a favorable trade for the Pirates in terms of upside players and team control. Jerry Sands put up solid numbers in AAA this year, and I think could push Travis Snider more than Jose Tabata and Alex Presley. Assuming that Ivan De Jesus Jr. makes the club out of Spring Training, he has good on base numbers in terms of minor league success, and has much more experience at short than either Holt or Josh Harrison. Melancon even though had a poor year as far as ERA goes, had a pretty good WHIP and his K/BB ratio was actually better than in 2011. A move back to the National League would seem to benefit him and would give the Pirates experience at the back end of the bullpen. Pimentel is coming off a subpar year, but the stuff is good and perhaps a change of organization could serve him well especially considering he’s still very young.

After much expected talks about Joel Hanrahan being dealt this offseason, the Pirates have officially traded Hanrahan to the Boston Red Sox. According to both Ken Rosenthal of Fox Sports and Jon Heyman of CBS Sports, the Red Sox will also get Brock Holt in the deal, while the Pirates will receive outfielder/first baseman Jerry Sands, infielder Ivan De Jesus Jr., and pitchers Mark Melancon and Stolmy Pimentel.

Sands played most of the 2012 season for the Dodgers AAA affiliate Albuquerque, where he posted a very impressive batting line of .296/.375/.524 in 522 plate appearances. He was sent to the Red Sox in October as the player to be named later in the Red Sox/Dodgers blockbuster deal in August.

De Jesus Jr. was also sent from the Dodgers to the Red Sox as part of that big August trade. He played in 67 games combined with AAA Albuquerque and AAA Pawtucket, and posted a line of .304/.343/.416.

Pimentel just a couple years ago was regarded as one of the best pitching prospects in the Red Sox system, but an awful 2011 season hurt his stock quite a bit. He made 22 starts this past season for AA Portland, where he had a 4.59 ERA along with a 1.36 WHIP.

Looking at their projections for 2013, Sands has a chance to battle for a spot in the outfield in some capacity, De Jesus Jr. will compete for an infield spot off the bench, Melancon despite the bad year, will more than likely be the setup man to Jason Grilli, and Pimentel may be sent back to AA since he didn’t have a strong year, and because he’ll only be 23 when the season starts.

Since I was busy with the traditional last minute Christmas shopping and my internet acting up, I’m going to give my assessment of the Francisco Liriano signing (better late than never).

Liriano at one point was the Twins ace of the staff, and featured one of the best sliders in baseball. The past couple years have been a real struggle for Liriano. He began this past season with the Twins where he posted a 5.31 ERA and a 1.44 WHIP in 22 games (17 starts) before getting dealt to the White Sox where he didn’t fare any better, posting a 5.40 ERA with 1.52 ERA in 12 games pitched (11 starts). While he posted a strong 9.6 K/9, his BB/9 was extremely high at 5.0. The Pirates gave Liriano a two-year deal worth $14M, which seems to indicate that they think highly of him despite his poor 2012 campaign. So here’s my assessment: I do think the Pirates overpaid quite a bit. There wasn’t much interest in him from other clubs, and if there were, they wouldn’t have gone that high with the Pirates in terms of a bidding war. I also think giving him a two-year deal was a mistake, because although he’s a very good strikeout pitcher, his erratic control numbers seem too risky to have for a second season in 2014. Perhaps a move to the National League might serve him well, but we’ll just have to wait and see.

Bucco Nation
Create a free website or blog at WordPress.com.